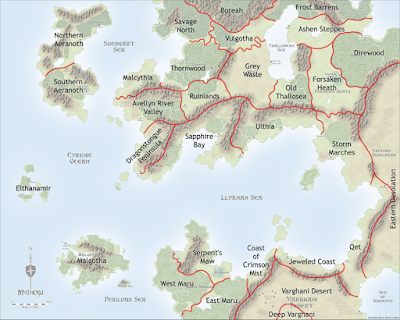 HenryJosephOFS, MCP said…
First, I have been following your work for since I found it years ago. I love the world you've built. Recently I compared the original Mythosa map I have with what is currrently on your blog. I am curious: Why the changes? Again, awesome, thoughtful worldbuilding!

I'm not sure which map you have, but the world has probably gone through four or five redesigns since I first put it together back in the early 90's :) Mainly I've done it because I grew dissatisfied with what I'd built and decided to create something better (though I usually keep particular elements from incarnation to incarnation). I've actually recently come up with a "protomyth" to incorporate into the setting that explains the changes (really, it's always been intended ;) ).

This latest incarnation I'd intended to be the last, since free time is a much rarer commodity than it used to be. And it did last quite awhile...but there's actually another version on the way. I didn't intend for that, but I'll have a blog post accompanying the posting of the map and PDF that explains the rationale.

The table below provides density figures for many common (and some not-so-common) substances. This information is useful for determining the weight (or volume) of objects and cargo. This table was pieced together from a wide variety of sources, listed in full at the bottom of the page. The inspiration for this comes from the old Dragon magazine article, "How Heavy is My Giant".

These figures have not been rigorously checked. Do not rely on this as a scientific reference!

The New Mythosa Map and Sourcebook

I may not have been posting on the blog but I haven’t been idle. I’ve just posted a revised map and version 1 of the new "Mythosa Cyclopedia". I’d like to say I’ve tweaked things slightly, but that would be a little inaccurate. But in my defense, that wasn’t my original intention! Below is a long rambling about how this new version came to be.

Though I’ve changed Mythosa quite a bit over the years (that’s actually part of the world lore now; the cycle of destruction and rebirth is a central part of a universal "monomyth"), the last incarnation was intended to be the last one. I was happy with the world, but my map looked too amateurish. So I started to look online for someone to hire to make a professional-looking map of Mythosa.

In the process I found an application called "Wonderdraft". I’d never heard of it before, but once I bought it and started using it, I was amazed. This was the mapping program I’d wanted for years, it just didn’t exist until now…
Read more

April 08, 2019
When it comes to dungeon maps, I favor utility over artistry. Maps with rendered furniture and torchlight shadows are nice, but if they’re only seen by the GM, they’re not very practical. I want maps that are clear and make layout with dungeon tiles easy. If they can convey additional information without being too busy, all the better.

Given the above, I really like this map of the venerable “Caves of Chaos” I found on The RPG Cartography blog. Not only is it practical but it contains a lot of useful information without being overdone. The only thing it’s really lacking is a square grid, though that might have clashed too much with the other elements (maybe tick marks on the outside of the walls could have been substituted...?). I’m not sure how much use I’ll get out of this map, but it’ll definitely be a model for ones I make myself in the future.

(Note: The first link is to a JPG of the map, but the PDF you can download from the second link is much higher quality).
Read more