March 20, 2017
While cleaning up some old bookmarks, I found this blog post from almost 10 years ago: Guiding player movement. It's interesting since what Shamus describes is something that I've started doing recently (with a fair amount of success), though I originally got the idea from the excellent Hill Cantons blog. Specifically, his first post on "point crawling" (and one of the commenters references the other article).

I may end up writing up some posts on how I use "point crawling" for my game, but I'm still working the kinks out. In any case, I think it's preferable to using a hex map since it makes it easier to "fast-forward" wilderness travel if nothing interesting is happening, but it still allows for player choice. The choice isn't as great as "which direction of the six do you want to travel out of this hex", but it tends to be a more meaningful choice. Hex crawls have the danger of turning into punctuated slogs, whereas point crawling moves the action along to meaningful locations. I still consider point crawling to be "sandbox", since the direction of the campaign is (or should be) dependent on the players' choices rather than moving from A to B to C.

One of the commenters sums this up nicely, encompassing my feelings better than I'd been able to until I saw what he wrote:

...asking the players “which way do you go now” is utterly alien to me. It’s not even that I don’t care about the answer, it’s that I actually don’t understand the question. It’s like being asked “would you rather speak entirely in rhyme, or have arms that waved uncontrollably when you walked”.

If I am presented with a decision to go left or right, but no clear indication about what the consequences of those decision will be, then that is no choice at all, because I have no meaningful way to make a decision.

I also have found that with sandbox-style games, players are often paralyzed when asked "what do you want to do" since the options are literally infinite if they don't have a particular goal or goals in mind. But if the scenario is, say, "You can take the northern path to the ruined dwarven city, the eastern trail through the swap to the black dragon lair, or the southern road to the trade city of Seaburg", now players have meaningful choices.

This and one of the other comments got me to thinking about how styles change over time:


...when I was a 12 year old DM with 10-12 year old players, we made games only using the Greyhawk map and the DM Guide’s table of random Wilderness encounters. Move one hex a day, roll for day and Night encounter. We had fun!

Now, 20 years or so years later I’m more of your school of thought. Our group is much more action and Investigation oriented, while we still play a variation of D&D. Travel is short unless an ambush is planned or a key story/plot point is planned on the road ahead...

The first part reminded me of when I was a kid, "hexploring" and hex crawls were common (generally using the old Greyhawk boxed set maps with the hex overlays), and we enjoyed it. We also, as recently as college, used to role-play shopping trips, complete with extensive interaction with the NPC vendors, and we had fun with that as well. These days, hex crawls seem too drawn out, and role-playing something as mundane as shopping for arrows is something we'd never do. Part of it is probably due to the fact that my groups consist of responsible(?) adults with careers, families, mortgages, etc., so we want to maximize our gaming time, stripping away the unnecessary bits in favor of the more exciting parts of the game, but part is because haggling over a few silver or gold for whatever reason isn't fun any more. For me, that's also why I started to grow move away from 3.x and 4E (and Pathfinder) towards more OSR-oriented games (so 5E came at just the right time).

The table below provides density figures for many common (and some not-so-common) substances. This information is useful for determining the weight (or volume) of objects and cargo. This table was pieced together from a wide variety of sources, listed in full at the bottom of the page. The inspiration for this comes from the old Dragon magazine article, "How Heavy is My Giant".

These figures have not been rigorously checked. Do not rely on this as a scientific reference!

August 08, 2016
Yes, you read that right - a new version of TableSmith has been released! I realize it's long overdue, and it's not a huge release, but it is something (and finally addresses the folder access problem that's plagued 5.1 since Windows Vista was released).

There are some new features, but this is primarily a technical update to address two things. First, the standard installation puts the program and other "read-only" files into the "Program Files" folder of Windows, while the tables, config file, and other mutable files go into a TableSmith folder in the user's Documents folder. This is the expected installation that Microsoft encourages, and fixes the issue where everything was installed into "Program Files", which then created issues when TableSmith tried to save it's configuration information. "Back in the day" (i.e.; Windows XP and earlier), you could do that, but Vista and later didn't allow for that.

On the topic of impractical armor 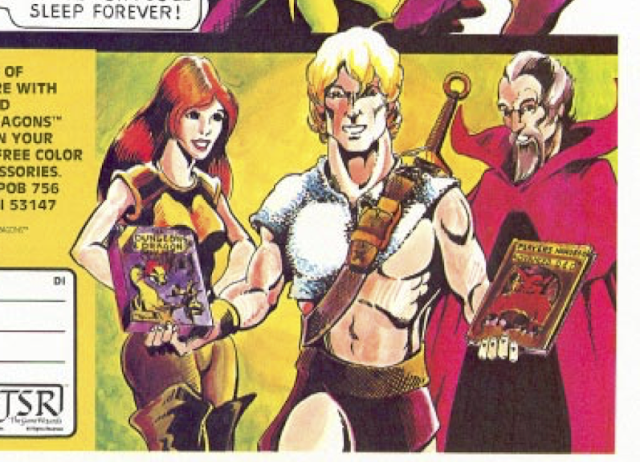 There's been plenty of discussion over the years about the impracticality of the armor female characters are often portrayed wearing, but can we take a moment to discuss this travesty?


This is from Dragon #52, for a D&D ad. It's kind of a chainmail half-shirt but slashed diagonally up the side for...reasons? Maybe he gets a Charisma bonus to distract female orcs with his partially-exposed pecs...
Read more